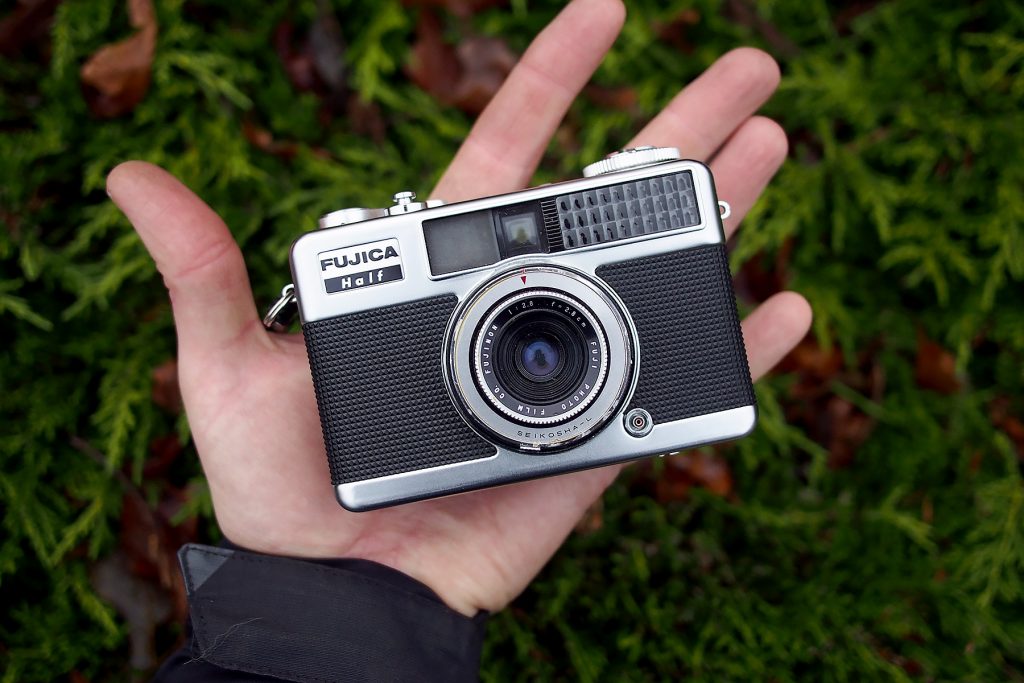 Now here’s a camera I’ve been looking forward to using. I’ve had a soft spot for Fujica gear for as long as I can remember. When I was a kid, my dad’s old Fujica ST605n was the shiny metal box with which I would faff about and pretend I was taking photos. It would be no exaggeration at all to say it’s Fujica’s fault that I took up photography in the first place, and why I still shoot film today.

Anyway… The little Fujica Half is an absolute beauty of a thing (I say that about pretty much all the cameras I write about!). It’s a pocket-sized half frame camera, good for 72 shots on a normal 36 exposure roll and has full auto-exposure. The lens is reputed to be excellent, punching well above its weight, especially considering it renders only half the detail of a full frame camera. The body is all metal and the camera feels weighty and well engineered. No batteries are required, and focusing is a simple zone-focusing system. To shoot the Fujica you simply select one of four possible focal ‘ranges’ and fire the shutter. The camera does the rest. Well that’s the idea anyway!

The Fujica’s first trip out with me was for a walk around the Langsett area with Lucy and some friends. We were blessed with some early winter sunshine this November, and we had the scenery to match. Having 72 frames to play with felt liberating, as did the relatively simple point and shoot nature of the Fujica. The company was good, the walk was invigorating, and I was having a great time blasting out shots of the light through the trees, and some splendid Yorkshire countryside. The greens were particularly green, the sky blue, the mosses and lichens on the stone walls were vibrant in their russet and ochre, and the sun bathed everything in a warm golden light. In truth, it would have been a good day for a roll of colour film, but hey ho…

A few days later and the Fujica was out for another walk. We walk a lot it seems. I’m not sure what that says about me. Perhaps that I lack imagination, or perhaps that I love being outdoors, or maybe just that we have a young dog who has too much energy to be contained all day. Probably all of the above. In any case, we were out walking again in some more winter sunshine. I spotted an aesthetically pleasing row of caravans (has anyone ever said that, ever?), with an even more aesthetically pleasing old VW campervan parked amongst them – so out came the Fujica.

My love affair with this lovely little camera was over almost as soon as it began. The shutter is now frozen and the winder won’t move. Try as I might, I can’t get any life from the Fujica. I took solace in having at shot at least 40 or so frames before it died, and I could use the remainder of the film in another camera. All of which would be fine, but when I developed the film it was clear that the shutter had been playing up all through those 40 frames, and in the end I only got 6 pictures. The rest were all blank. The shutter had never opened at all. Which sucks. I had checked the camera was working before loading the film and all was good, so I don’t really know what the problem is. For now it’s been put on the (huge) pile of minor problems to deal with at some later point in life haha! It’s a shame because the 6 photos I did get were sort of pleasing, and that famed lens looks to have lived up to its reputation. The camera feels really great to use, and is beautiful to behold too. What a disappointment that it bit the dust, but at least it disappointed me for the right reasons.

So that’s that then! Short and sweet. I stuck the rest of the film in to my next camera which shall be revealed in due course, and the results of that experiment were the polar opposite to the Fujica. That next camera is one I expected little of, but which delivered results I couldn’t be happier with. You’ll have to wait for that one another day though.

In the meantime, I’ll share my favourite image to come out of that walk around Langsett, and funnily enough it’s one I painted rather than photographed. Maybe I should stick to painting. A paintbrush is a whole lot more reliable than vintage cameras!

Thanks for reading this article. I hope you enjoyed it! If you like this sort of thing then stick your email address in the box below and I’ll let you know you whenever I make a new post.

If you came here looking for something a bit more detailed than my post (I don’t blame you), you can find one here on Mike Eckman’s website. His camera even has the fancy motor drive on it!

If you want to read my review of another half frame camera, you can check out my review of the Olympus Pen EE3 (which is an awesome camera) here on 35mmc.

See you on the next one!