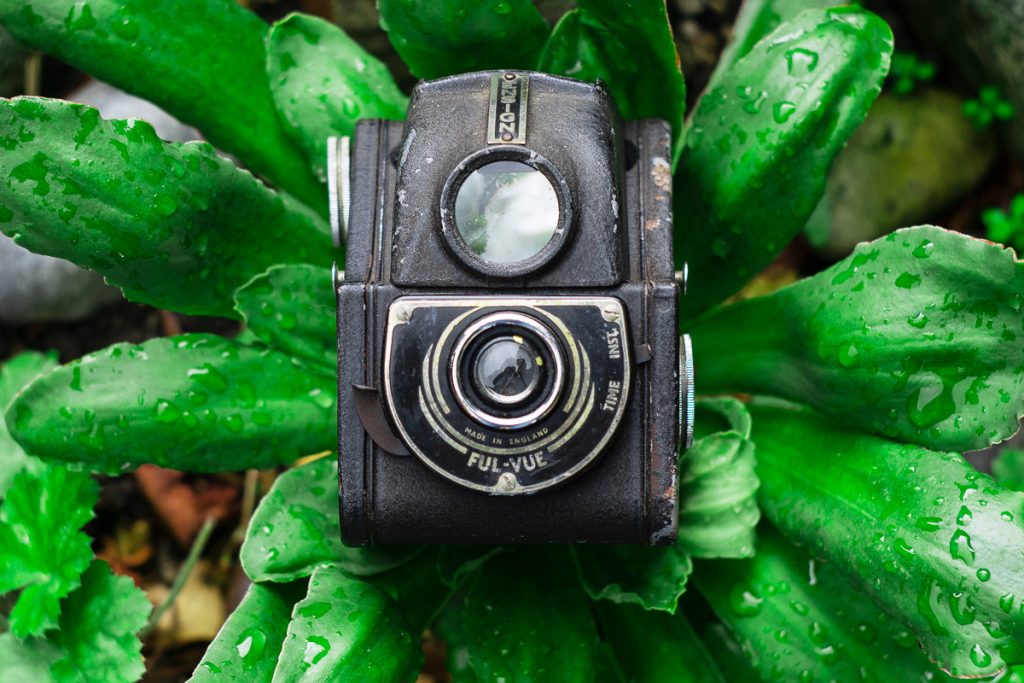 A short while ago I came across an Ensign Ful-Vue and decided that it looked like a cool little thing. Take a look at the pictures below and you’ll see that there’s a lot to like about the aesthetics of this camera. Released in 1946, this is the second incarnation of the Ful-Vue name. The design was modern by the standards of the time, and the quirky design was a clear departure from the strictly angular lines of its predecessor.

Despite its ‘modern’ appearance, the specifications of the camera are brutally basic. For your money you get a single aperture of F/11 and a single shutter speed of around 1/30s. There is also a ‘TIME’ option, for long exposures. Standard focus is around 10ft to infinity, with the option of pulling the lens out a fraction to give a ‘portrait’ distance of 3ft to 10ft. The lens itself is an uncoated single meniscus thing that looks like a very small jam-jar bottom.

That’s about as much technical gubbins as I’m going to share. All of the technical details can be found elsewhere online. If you’re interested in such things, Mike Eckman has an excellent blog post with all of the information you could possibly want. Alternatively, if you’re looking for a veritable mountain of Ful-Vue photography inspiration, you can’t do better than the Life in Ful-Vue blog.

This particular Ful-Vue came to me via a camera swap with Peggy over at Camera Go Camera, who disliked it so much that there was talk of turning it in to a tea-light holder! I figured that if that was all it was good for, it would make for an interesting challenge to shoot. Mercifully, the Ful-Vue uses readily available 120 film – so at least getting hold of film isn’t a challenge.

So what’s the issue here? I think it boils down to a couple of big things. A super slow shutter speed makes hand-holding the camera difficult, and also makes the camera prone to overexposure with relatively fast modern films. The generally accepted solution to the latter problem is to ‘pull’ the film down to say ISO 50, or even slower. This will cure the overexposure problem, but it tends to leave the images looking flat and dull, which isn’t my cup of tea at all. That being the case, I decided to stick to using the film at ISO 100, and to hold a yellow/orange/red filter in front of the lens depending on lighting conditions. That should cure both the over-exposure and contrast problems in one go, hopefully…

The solution to a slow shutter speed is obvious. Just stick this bad boy on a tripod and you’re good to go. Well… no. The Ful-Vue doesn’t have a threaded socket for a tripod or a cable release, so it’s back to the drawing board. After scratching my head for a while, I came up with this solution which uses the extending cradle bit of a selfie stick to hold the camera, which in turn can be attached to a tripod in the usual way. Bingo – we’re good to go.

And go we did! For another sunny walk around the Yorkshire countryside – MINUS A TRIPOD! I just couldn’t bring myself to lug one around for 8 miles in blazing heat, so I decided to experiment without one. How bad could it possibly be? Well you can decide for yourself. Pretty bad though I’d say! I like to think that I have steady hands, but there’s still plenty of shake in the pictures below. Oh well. I kinda like them anyway, especially the one of the swallows sitting on the line. It’s so bad it’s almost artistic.

So that’s hand held distance shots covered, but how about something closer up? Something in lower light perhaps? The next few shots have that covered. We found a lovely little shady spot by a stream and an ancient packhorse bridge, which provided the lower light necessary to shoot without a filter. All three of the pictures above were over-exposed despite filtering, but these two in the shade are a little better I think. There’s still a fair amount of camera shake, but it’s better. I’d placed the camera on a rock to take the picture of the bridge, so that’s the sharper of the two. I think both of them were taken in the 3-10ft focus mode.

A little while later we found another shady spot under some trees to stop for lunch. We were perched on the brow of a hill, with a tremendous view out to the horizon before us. The sun was still beating down beyond the shade of the trees, and the wildflower meadow we were at the top of was perfect. I took these two photos of Ciaran and Simon hand-held with a yellow filter. Both are shot in ‘portrait’ mode. The results are shaky again, but I like them still. The picture of Simon (on the right) has a nice amount of contrast, and in places the picture is sharp enough to bring out some detail. It looks a little bit more like the kind of picture you’d expect from a 120 negative, so things are improving!

Aaaaaand then it went wrong! Perhaps it was the heat, or the light, or the fact that I was knackered – but my attempt at a group shot is the shakiest of the lot! Unfortunately, it’s not the kind of picture that tolerates this kind of artistic (yeah right) treatment, so it’s just a bit of a dud. You can at least get a vague impression of the meadow, and the view we had for lunch.

In fairness to me, I found the shutter on the Ful-Vue particularly difficult to operate smoothly. The shutter is fired with a bent metal tab. You press the tab downwards, downwards, and further downwards still. About a week later you eventually reach the bottom of its travel and the shutter fires. By which point, the breath that you were holding has run out, your heart is racing, and you’re shaking from trying to be perfectly still for much longer than you’d anticipated. Tripping the shutter jolts the camera downwards a little. Just enough to be a real pain in the arse at 1/30s! It is most certainly not the buttery smooth shutter release I’d recently experienced on the Kodak Retina 1A.

By this point I’d learned enough (even before seeing the negatives) to know that I really did need to use a tripod with this camera, so these next two shots of Lucy were taken a day or two later once I had the tripod to hand. As you can probably see, they are much better, despite the weird ghosting from the lens. In both cases I used a yellow filter, so perhaps the light was flaring across that.

My final two shots from this first roll with the Ensign Ful-Vue were shot whilst out on a walk. We were in the church yard at Upper Denby. The light was good and the gravestones were standing obediently still, so I decided to have one last experiment. Two similar shots, one hand-held and one with the camera resting firmly on a conveniently placed slab of stone (sorry whoever’s in that grave!). The results are plain to see. I’ll leave you to guess which was which. From memory, I used an orange filter for both.

So there we go. Twelve shots with the 1946 Ensign Ful-Vue. I guess I learned a lot from this first roll. The big issue is the shutter speed. The lens seems to be more or less acceptable when the camera is absolutely stationary, so a tripod really is essential. Using the filters to compensate for faster film works well in shade, but isn’t enough in blazing sunshine. I might have to use a polariser or ND filter of some kind next time. Which I guess means that there WILL be a next time. After all, I did enjoy using the Ful-Vue. It’s cute, is capable of some ‘artistic’ results, and I enjoyed the technical challenge of using such a basic camera. Definitely one to experiment with further in the future. Either way, I’ll spare it the humiliation of becoming a tea-light holder!

What’s next then? Well… I’ve just finished a roll of 35mm using a Helios 44-2 lens, so that will be coming soon. I’m not sure what to try next though. I have a Kodak Brownie Cresta that I’ve just cleaned up, some folding 120 cameras I’d like to try, and the Canon A1 is still looking at me too. Choices choices…