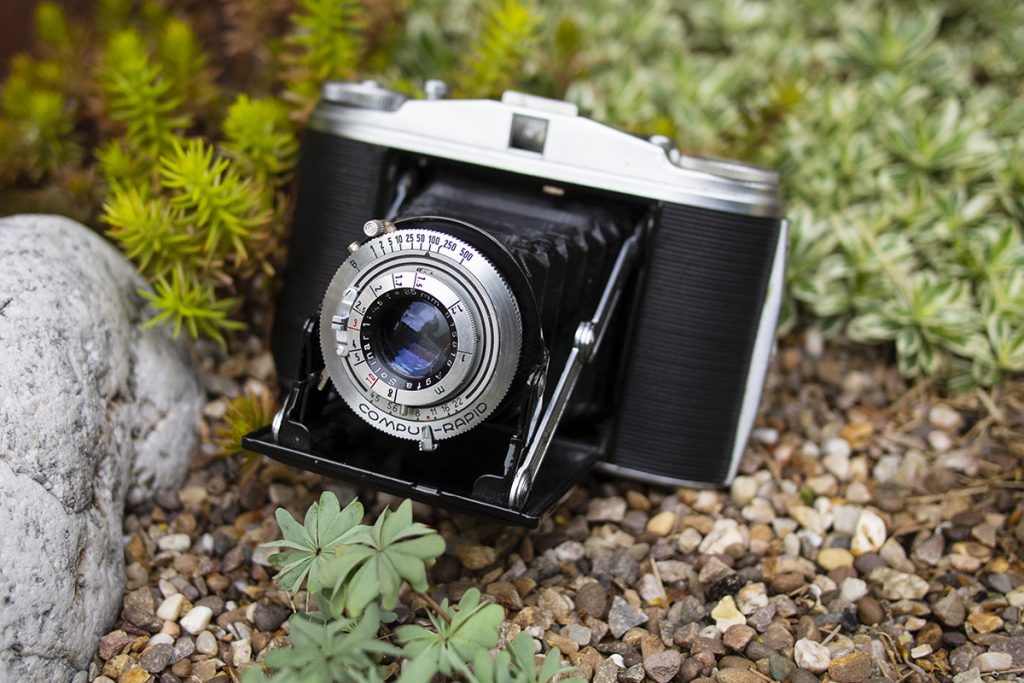 A little while ago I asked around a few friends to see if anyone knew of any old film cameras that were squirrelled away in a state of retirement. You know the sort of thing – that camera that your parents took photographs of you with when you were a kid, and it’s been sat in a cupboard gathering dust for the last twenty odd years. Yep, that’s the one.

Happily my request turned up a few treasures, one of which was this lovely Agfa Isolette II (1950-1960) folding medium format camera belonging to Ken, who is one half of the parental team responsible for bringing my good buddy Ciaran in to the world. Despite this early slip, Ken’s not all bad – he has good taste in cameras at least.

This particular Isolette rises above most of them because it has the rare and rather special Solinar lens rather than the usual Agnar or Apotar variants. It is my understanding that the Solinar was the top of the tree when it came to Agfa’s lenses, and it’s true that there aren’t that many about if you look. Searching online through photographs taken with a Solinar lens would also seem to suggest that it’s a nice piece of glass.

Unfortunately Ken’s Agfa (which we’ve been calling Kenzagfah) has seen better days. The body itself was in pretty good condition, and even the notoriously cack Agfa bellows only required some minor patching with Dr John’s patented bellows repair goo (50/50 mix of PVA and black acrylic paint) to make them light tight again. The real problem was with that precious Solinar lens, which looked like it was making an attempt to grow a fungal forest between the elements. There really was nothing to be done but take it apart and make an attempt to clean it.

Let me state at this point that I am not, and never will be, a camera repair technician. I’m fairly bright and I enjoy tinkering with things, but I am totally devoid of patience and cursed with my dad’s sausage fingers. Give me a hammer and I’ll tune your engine, but spare me anything that requires delicacy. Bringing ‘Kenzagfah’ back to life was going to require my A game.

Sparing you the boring details of how the Agfa comes apart, I did manage to get at all sides of the various lens elements and was able to clean them. I didn’t even need to use the hammer! I don’t think I was the first person to make an attempt at this because there wasn’t actually any fungus inside the lens. What I initially mistook for fungus turned out to be fungus-shaped damage to the coatings of the lenses. There was nothing I could do about that, so after a bit of cleaning and dust removal it all went back together. All I could do was hope that the damage to the coating didn’t ruin the pictures too much. Luckily, the shutter and aperture iris seemed to be working nicely so I didn’t mess with those. The front and rear viewfinders were really fogged up – so off came the top (camera not me) and with a little bit of spit and polish they came up sparkling clean again.

Taking the front lens element off for cleaning requires unscrewing it from the camera, which in turn throws out any focusing calibrations. When putting it back together you’re supposed to ‘collimate’ the lens, which basically means sorting out the focus so that it matches up with the distance scale on the lens. In truth, it’s a proper faff to do. There are various technical and exact methods for collimating a lens, none of which I had at my disposal – so I made my best attempt using a sharpie, a piece of paper, a metre stick, some sellotape, and a magnifying loupe. Those of you in the know won’t need any further explanation, and those of you not in the loop should find a better method! In the end though, I thought I’d just about got it sorted and was ready to shoot some film.

In this case I chose to shoot a roll of Fomapan 100 from Analogue Wonderland. I’ve used it before and I like it. It’s about as cheap as film gets these days, but it does a good job. Order it through the link and (if you haven’t used Analogue Wonderland before) you’ll get a free roll of 35mm Kentmere film for your troubles too. Happy days!

As usual in this world of Coronavirus and furlough, the camera came out with me for some local walks to all the usual sort of places that I’m getting a bit bored of now. Not that I’m being a grump (honest). I’m incredibly grateful that the gang and I are all healthy and able to do this sort of thing, I just kinda miss the wider world – know what I mean? Anyway… more walks with the team. They’re a good team.

Right off the bat then, you can see that my dodgy collimating wasn’t entirely a success. The focus point on the team picture above is closer to me than it should be, and that’s a problem that continues right through the entire roll. It’s not especially noticeable when shooting at narrow apertures, but anything at F8 or wider shows it up. Oh well… at least the camera looks to be light tight, and there’s nothing particularly funky going on due to the fungus damage.

In fact, the dodgy focal point in the picture of the flowers has actually worked out nicely. I was certainly focusing further back than this but the result has worked well I think. Oh wait… I mean… my artistic decision to place focus so close to the bottom of the frame has worked well. In all seriousness though, it’s lovely right? The contrast is good, sharpness is good where the focal point is and oh man that bokeh is kinda swirly and delicious! I like this shot so much that I’ve made it available as a print in the shop. Go take a look!

The church is St Michael’s at Emley, and is a beautiful picturesque church of medieval origin. Recently we were lucky enough to drop on the vicar (figuratively speaking) who invited us in to look around. On that occasion I had my Canon A1 with me, so I’ll share a few interior pictures in a later post, including a photograph of an original medieval cross of the Knights Hospitallers. Try to contain your excitement…

Now that I’ve basically frittered away what few remaining cool points I’ve been desperately clinging to, I may as well accept that I am no longer young. I really like history, strong tea, old cameras, slippers, and not having a bloody clue what they’re playing on the radio. My jeans have stretch built in, and I ache all over on any given day of the week. I’m getting older. There, I said it… And for what it’s worth I like old cars too, even when they’re not in focus.

Seriously though… ooooooof! That’s a nice Triumph Herald. I’d love to own a classic car again one day.

The next couple of photographs were taken in Barnsley town centre. Not exactly a hotbed of architectural excellence, but it’s getting better. The old town hall is an obvious landmark from miles around and there’s something about the old ‘Capones’ building that pleases me. I’ve attempted to photograph it several times over the years, but I’ve never managed to capture what it is that I like about it. Sadly this time was no exception, and the badly calibrated focus really shows here. It’s not even close to the building. It’s actually sharp on the building wall closest to me. That’s miles off! Oh well.

Despite the focus issues, I think Kenzagfah and many other folding medium format cameras like it are really underrated. I loved having the ability to carry and shoot medium format with a pocket-sized camera. Don’t be under any illusion that the Agfa is truly tiny, but it does easily fit in my hand and back pocket. At only 567g it’s light enough to stick my rucksack for a walk too, something I couldn’t say of any of my non-folding MF cameras. It’s liberating to be able to shoot MF this way, and I can see the folding MF camera game getting a bit addictive. There are literally hundreds of different types to choose from. In the mean time, I’m going to make another attempt at collimating this one for Ken. I’ll probably stick another roll through it to check.

For now though, lets have a look at the rest of the photos. There’s a bridge over a canal (exciting) and an out of focus VW camper. The focus is actually on the car to the right. Which reminds me, the viewfinder shows a fairly accurate picture of what will end up in the photograph, but the negative does perhaps show a fraction more than you see on site. I don’t recall seeing the car when I was there, but that just might be my newly admitted age getting to me…

As usual I’ll finish off with some portraits. I wanted to take a nice photo of Ciaran on his dad’s old camera, and I did my best but the lad often looks like a stray from a backstreet mechanics! In fairness we were tinkering with motorbikes that day, and I usually look like that too, I’m just clever enough to be behind the camera. The other photo was another team shot from a recent walk. Simon managed to find us a lovely little spot by a stream to stop for lunch. The sun came out and lunch tasted good. Rooting around in the river for skimmers also turned up a family of our native and highly endangered white clawed crayfish. I’d tell you all about it, but it would cost me too many cool points.

I deliberately don’t include a lot of technical details in these blog posts, but if you’d like to know more details about the Agfa Isolette, or about folding medium format cameras in general, I’d recommend this article from Jim Grey, and this article by Graham Rogers on Emulsive.org.

If however you’ve enjoyed my own humble ramblings about the Agfa Isolette II, I invite you to sign up to the blog so that you will be notified whenever I make a post. All you have to do is stick your email address in the box below and hit ‘send it’. Additionally please feel welcome to leave a comment at the bottom of this page. Cheers gang!