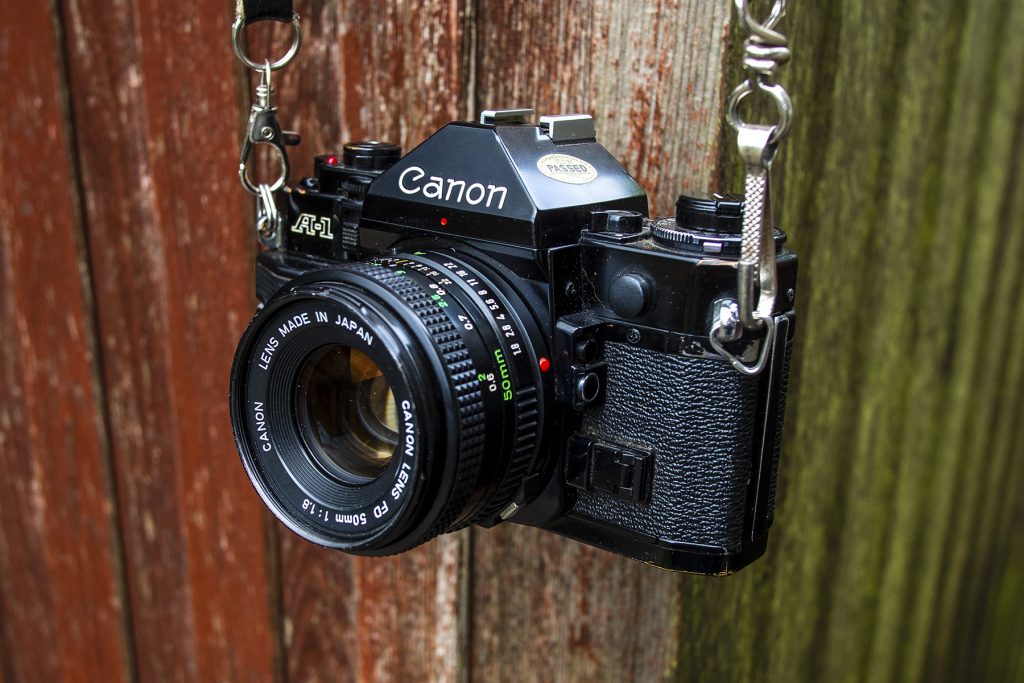 Picture the scene… It’s some time in the late 1970’s, or maybe the early 80’s. Your hair looks like the bastard offspring of Rod Stewart and Farrah Fawcett, and your bellbottoms are so tight that your baritone has turned a bit Bee Gees. Life is good. You’re young, cool, and your moustache game is strong. You’re pretty good at photography too. At least that’s what you tell all the girls. You’re no professional but you’re not messing about. You mean business, and you want people to KNOW that you mean business. You want high quality photos and your pocket is bulging with a fat wad of fivers and some smokes.

Which camera do you buy?

Chances are you’d have bought one of the fancy new fully automatic things coming out of Japan. It was around this time that the camera game took a giant leap forwards with the invention of the microcomputer – and the first camera to sport this miracle of technology was the Canon A1.

Such technological wizardry meant that your new A1 was able to do everything for itself except focus and press the shutter. Whether you wanted full auto, aperture priority, shutter priority, or a bunch of other features – the A1 would deliver. Throw in a range of quality lenses and a sexy black paint job, and it was an easy decision. All you had to do was kick back, look cool, and let the camera make the decisions.

Forty years later then, and the Canon A1 is still delivering the effortless picture taking experience it promised to my dad’s generation all those years ago. Sure, I have cameras that are much older than this which work perfectly, but they’re entirely mechanical. Most of the cameras I own from the dawn of electrickery have bitten the dust by now. The electronics just weren’t designed to last this long, and most of them haven’t. It’s no small miracle then that this camera which is older than me, works significantly better than I do.

The Canon A1 isn’t my usual type of weapon, but it has a place in my arsenal for all the reasons it appealed to our fictional character in 1978. It is capable of taking excellent pictures, with very little effort or thinking on my part. Some days you just feel like letting the camera do the work, right? Truth be told I rarely take the A1 out of fully automatic mode. Sometimes I’ll shoot aperture priority or override the exposure meter, but it’s a rarity. It’s basically a very capable point and shoot, that still retains a vintage SLR aesthetic. It’s capable of much more than I ask of it, and I’m OK with that.

When I bought my A1 it came with Canon FD 28mm and 50mm prime lenses, and I’ve since added a 35mm lens as an experiment in semi-wide angle shooting. It was with this experimentation in mind that I loaded the A1 up with some Kentmere 400 film from Analogue Wonderland. It’s good stuff and I’ve had nice results from it previously. If you want to try some, just click the link for a free roll with your first order. You’re welcome…

The first port of call for the Canon was at Emley church, which appeared in my last article about the Agfa Isolette. I usually end up with some kind of photographic overlap between cameras that way. Does anyone else find that? Anyway… I was just messing about at this point, and getting my head around the 35mm focal length. Luckily we were spotted by the vicar, who invited us in to have a look around. I was struck by the stained glass representation of Edward the Confessor (that’s how cool I am), and I had to take the photo. I thought it would be a good test of the lens. I like the photo and the focal length. You guys can decide for yourself.

Edward the Confessor is an interesting character. King of England from 1042 to 1066, he was canonised (so the story goes) because of his supposed piety and celibacy. In reality he was a pretty average king for the time, spending much of his early reign securing his power, falling out with his earls, fighting vikings, hunting, and all the other things Saxon kings did. Married to the daughter of an earl he particularly disliked, it is argued that his celibacy was a deliberate ploy to prevent the earl gaining power through his offspring. Edward himself was first cousin to William, Duke of Normandy – with whom he spent time in exile. It is said that during his exile, and thinking he would die without an heir, Edward promised the English throne to his cousin William. Upon Edwards death, Harold (son of the hated Earl) seized the English throne, rather annoying William who raised a fleet, crossed the channel and, well… conquered. The rest (as they say) is history.

But this is a photography blog…

My next outing with the Canon A1 took me out from Monk Bretton Priory along some tracks and trails in the area, following the path of the River Dearne and the old Barnsley canal. There’s nothing left to see of the canal, except a few overgrown ditches that would once have held water and seen much boat traffic passing through. The area has been reclaimed by nature, and has become an unofficial wildlife haven and (sort of) wetland habitat. It’s a nice place to be, and the trail we followed cut underneath the Trans Pennine Trail, which ran high on a bridge above us. The local youth have done what local youth always seem to do, and made the place their own with graffiti. I don’t mind graffiti really, and the juxtaposition of the artwork, architecture, and natural world inspired my next bout of picture taking.

A little further along the trail the landscape softened further still, and opened out into meadows of wild flower and grasses. The river cut through the scene which was sunny and bright. The way grew steeper through wheat fields until eventually we could see out across the horizon towards the glass works at Cudworth, a.k.a. The Temple of Doom. See if you can spot it in the picture below.

A few days later and the Canon accompanied the gang and I on yet another (sorry) local walk. As I mentioned in the last article, I’m really hoping that the world will soon begin to expand again. As things open up and we all get used to the new world we live in, I really would like to travel further afield and photograph more things. I have a few ideas I’d like to try, but now is not the time. For now it’s more local walks, and more local scenery.

This time we were around the Upper Denby area, and passed the church (not another one?!). At my request we ventured in to the churchyard to look at the graves. For generations my family lived close by at Ingbirchworth, and I wondered if we might find someone from the family. As it turned out, we did find a couple of gravestones bearing the family name.

Of course it wouldn’t be a walk without a team photo, and at least one photograph of Ciarán being weird. In this case, up a tree!

The rest of the roll through the Canon A1 was a bit of a mishmash of things, with no particular direction or intention. I think I’d also switched back to the 50mm lens by way of a comparison with the 35mm. Either way, the weather had certainly taken a turn for the worse by now and after several days of confinement indoors, I was looking for things to point a camera at. It always seems to me that 36 exposures takes me an age to shoot, but put a digital camera in my hand and I’ll blast out 36 shots in no time at all!

The two shots above show my Great Grandfather’s diary, will, wallet, and letters from his time as a prisoner of war in WW1, all kept in an original ‘Squirrel Confections’ tin. Percival served as a corporal in the Yorkshire and Lancashire regiment, and the diary details his movements as a POW through Europe to Cottbuss Seilow (?) POW camp in Germany and eventually back home again after the war ended. The will reads – “In the event of my death, I leave the whole of my possessions to my wife”. Very succinct, but then I suppose he had other things on his mind at the time. He did have time to send a postcard of the camp church back to England though. The inscription above the church door reads ‘Ehre sie Gott in der höhe’, which translates as ‘Glory to God in the highest’.

Finishing up the roll I snapped the dog (always willing), a mysterious shower hand (less willing), and a picture of myself in the mirror of the boat. There were a few others, but nothing of particular merit.

So what do I think of the Canon A1? Would I delve deep in to my bellbottoms and part with a fat load of fivers to own one? I suppose the answer to that one is… maybe. It depends what mood I was in.

As I mentioned earlier, the A1 does still deliver on its promise of effortless photography, and all three of the lenses I’ve tried are very capable at what they do. The camera itself still feels well built, and it still looks good in black, especially with the added patina of 40 years use. It is a camera I feel able to rely on mechanically. It will do whatever I ask it to do, even if I want it to think of everything for me. For all these reasons it deserves a long-term place in my collection, yet somehow it left me unsatisfied.

You’ll have noticed on your way in, the title of this post is ‘Canon A1 – The Clinical Picture Maker’, and the experience is just that… clinical. Back in the late 70’s the Japanese managed to make something almost Germanic in its ethos – which I suppose was the point. The A1 is precise, well built, highly capable and reliable, but ultimately a bit boring. Looking back through these pictures I can’t help thinking wistfully of the Helios 44-2 from a few weeks ago, and of FSU equipment in general. There’s something so wonderfully unpredictable and weird about Soviet gear that I really love. You never quite know what you’re going to get, and for me that inspires creativity. In contrast, with the Canon A1 I felt like I was documenting rather than creating.

If you’ve made it this far, well done! Perhaps you’d consider sticking your email address in the box below. That way I can notify you whenever I make a new post. After all, you wouldn’t want to miss more of this stuff, right?

Additionally, if you’d prefer to read a more detailed review of the Canon A1, without the bellbottoms, dead monarchs and inconclusive ‘conclusions’, I invite you to check out these articles from across the World Wide Web.

James Tocchio’s review of the Canon A1 on Casual Photophile – James actually reaches more or less the same conclusions as me, only five years earlier. I really should have read these articles first…

Lewis Collard’s review of the Canon A1 – Which includes all the information a camera review should actually include, unlike mine.