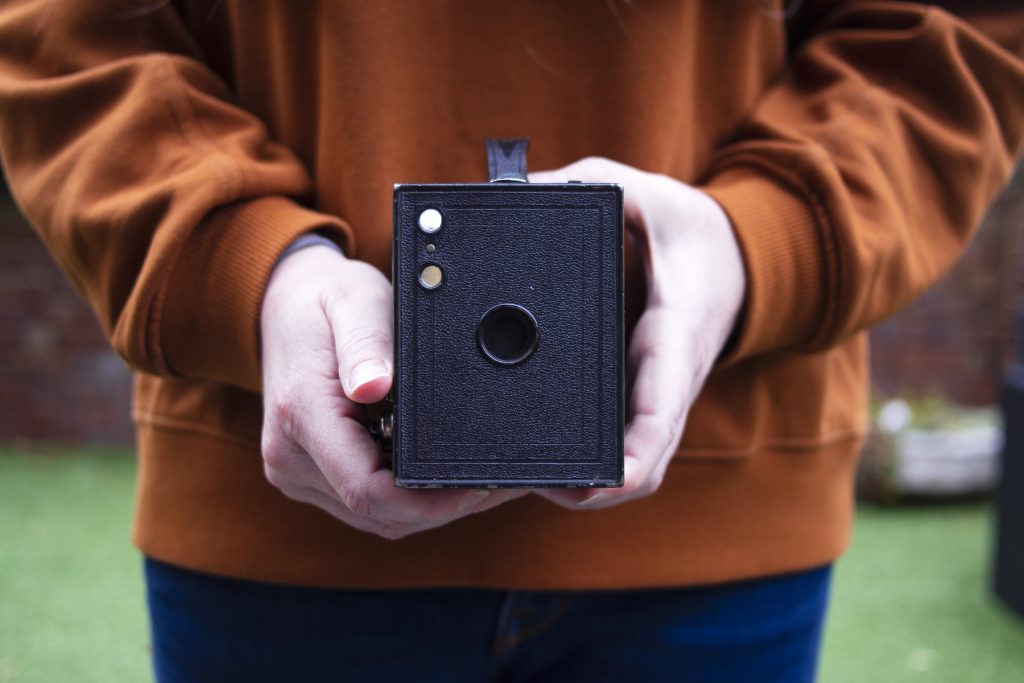 The once ubiquitous Kodak No.2 Brownie has been with us since the dawn of consumer photography. Before this simple little box came along, photography was usually the preserve of strange little people who spent a lot of their time in the dark and smelled of chemicals. That is to say that it was pretty much the preserve of professionals. For the average Joe in the street, the thought of making photographs of their own would have been tantamount to witchcraft.

This situation continued for many years until 1901, when the clever bods at Kodak thought it would be a good idea (read: profitable) to make photography available to the unwashed masses. It turned out that they were right, and a legend was born. The world would never be the same again. In a roundabout way the No.2 Brownie is to blame for instagram, and the many many selfies of teenage girls in bog mirrors that bombard us daily.

The early cameras were made of cardboard, and very few of them have survived the 120 years since they were made. Most of the ones still around today are the model F variant, produced from the mid 1920’s, which is made from aluminium. There were several other small changes over the years, but for the most part the spec remained the same throughout production, and that spec was super basic.

The Brownie has a single meniscus lens (single piece of glass), three different sized holes punched in an aluminium tab which serve as apertures (approx f16, f22, f32), and a single speed (approx 1/50s) rotary shutter made from two thin bits of metal and a spring. There are two tiny viewfinders, one for portrait and one for landscape orientations, another tab of metal that jams the shutter open for ‘BULB’ mode, and a shutter button that works in both directions. That’s about it!

It is the sheer simplicity of the design that made the Kodak No.2 so cheap to buy all those years ago, and the simplicity of the design means that most of the Brownies around today will still work. There’s just so little to go wrong. With a little cleaning of the lens and the viewfinders, this particular Brownie was ready to shoot, which is amazing to me considering it is at least 90 years old and cost me 99p on eBay.

Thankfully, when Kodak released the Brownie, they invented a new film format to go with it. That format is still with us today as 120 – so film is readily available. In this particular case I went with Fomapan 100 from Analogue Wonderland. Shooting the Fomapan at box speed meant that I would be more or less correctly exposed on a lightly overcast day with the widest available aperture set. Perfect then for the British summertime. A single shutter speed of 1/50s would ordinarily dictate the need for a tripod, but in the end I only used one for half of these shots, and I think they’re fine considering.

First up was a walk with Lucy and her parents. I snapped this family photo with Emley Moor mast in the background. I actually remember setting this shot up, and I left a huge amount of room around the group to account for any parallax or framing errors, but when I developed the negatives it was immediately obvious that what I’d seen in the viewfinder was not what I’d ended up with. The shot was much much tighter to the group than I’d planned it to be. So much so that they’re perched right at the bottom of the frame!

The next shot demonstrates the same problem. This really cool derelict cottage was central in the viewfinder with plenty of space around it, but the final result has it sitting at the bottom of the frame again. Still… the lens looks decent for a 90 year old single meniscus, and it’s a hell of a lot better than the one on the Ensign Ful-Vue I shot a while ago.

The two shots below were taken from the bow of our boat, and are probably some of my favourites from the roll. That lens has done a grand job considering, and the pictures are plenty sharp enough in the centre. The same framing issue is present again, but it doesn’t seem quite so pronounced this time. Either way, I think these are passable images.

The next one however, is not! What you’re seeing here (besides Burton-upon-Trent town hall) is a multitude of errors. Firstly, this is my only portrait oriented shot on the roll, and it’s immediately clear that the mirror in the portrait viewfinder has slipped (confirmed later by opening up the camera again), so the whole picture is wonky. Secondly, you’re seeing a fairly substantial amount of light that shouldn’t be there. Unfortunately as I was faffing with the camera to take this picture, the tiny little latch that holds the back of the camera shut slipped off, and the rear door opened a little. I managed to jam it shut again fairly quickly, but obviously I’m not as fast as the speed of light. I’ve since bent the tab a little so that it puts up a stiffer resistance. Hopefully both of these problems are now remedied for the next roll. Lesson learned.

These next two then…. What can be said?! They’re supposed to show the canal basin and lock gates at Slaithwaite. What they actually show is a lot of sky, and not a lot of what they should do. Damn you Brownie, why do you disappoint me so?! I think these two would have been my favourites, if only they’d been framed correctly.

Slaithwaite (by the way) hosts a regular ‘moonraking’ festival, inspired by stories of smuggling in the area. The story goes something like this…

One of the stories tells how a band of smugglers would hide their illegal bounty brought in by narrow boat under the canal bridge. On the night of a full moon, they took their rakes and went to fish out one of the barrels of rum, but they were caught in the act by the militia. They avoided arrest by claiming to be out ‘Moonraking’, the reflection of the full moon being clearly seen in the water!

This last shot was taken in my local town centre and was taken with the Brownie perched on the floor. The graffiti was central in the viewfinder again, but obviously it isn’t on the negative. I don’t mind it though, I like this one all the same. As it happens this is a bit of a compromise image. I’d hoped to capture someone walking through the underpass, silhouetting them against the lighter area towards the back. I waited a while but nobody came, and I wussed out anyway. I felt like such a weirdo scrabbling around on the floor with an ancient camera. My town isn’t the kind of town you want to go around being obviously weird, if you know what I mean. Either way, I don’t think I’ll make much of a street photographer at this rate! Street photography with a box camera is an interesting concept though…

Aaaaaaand that’s it! With just 8 shots on a 120 roll, shooting the Kodak Brownie No.2 isn’t the cheapest way to take photos but it is a lot of fun. Using such a basic camera means engaging your brain a bit if you want half decent results and I enjoyed the process of taking these photos, even if the images weren’t quite what I’d hoped for. Still, for 99p I think I got an absolute bargain and with a bit of experience under my belt I’ll do better next time.

There’s really something quite magical about using such an old camera, and shooting the Kodak No.2 in particular feels like a rite of passage for any film photographer. I’m glad I was able to pick one up, and I’m looking forward to using it again. In the meantime, if you have experience of shooting a Brownie please leave a comment and let me know how you got on. Do you have any tips or tricks that you’d like to share?

Once again, I’ve made it to the end of a ‘review’ without giving much in the way of useful information, for which I apologise profusely. It does however give me the opportunity to link you to Mike Eckman’s excellent review of the Brownie, which should tell you everything you may want to know about the camera. I also particularly enjoyed reading of Jim Grey’s adventures with his Brownie, and of course I’d love it if you’d check out Peggy’s blog post about the Brownie. I really love her photo of the ice cream van!

If you’d like to sign up to ’35mmRetroPhoto’ and be notified whenever I make a post, you can do that below. Just pop your email in the box below and hit ‘Make it so!’.

See you next time!