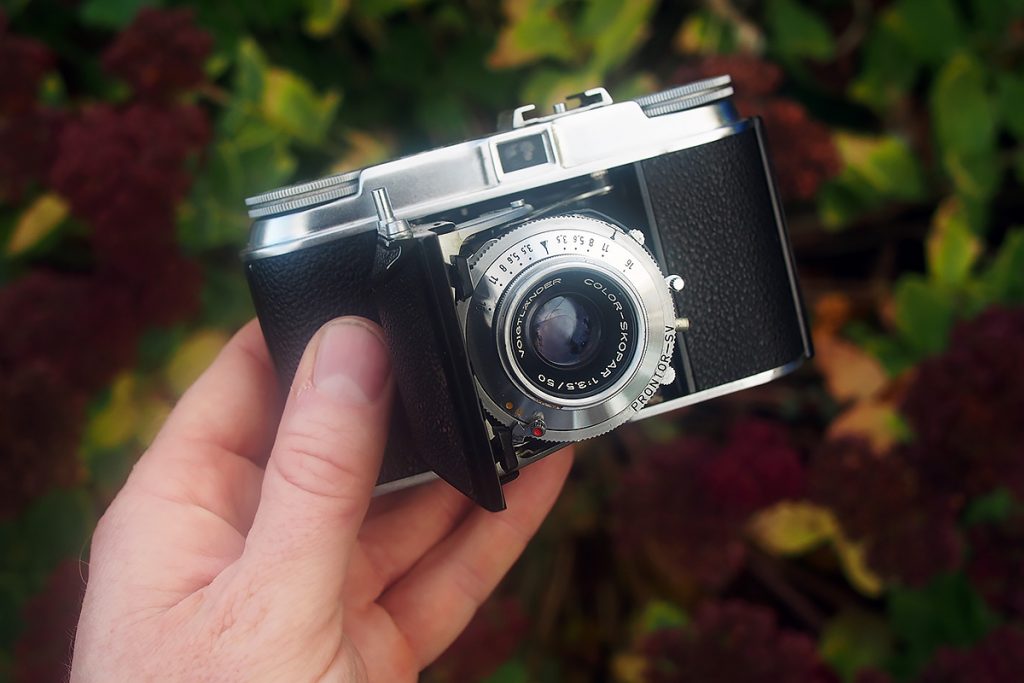 Anyone who’s been following the blog will be able to attest to my love of folding cameras. There’s something wonderfully old fashioned about them. They’re so simple and yet so beautifully complicated, like the best art. The way the lens appears from within the depths of the camera body gets me every time. It amazes me that something so elegant and intricate comes from a time before computers and robotic production lines.

Somebody, somewhere, sat down one day with an idea in their head, smoked a cigarette and then drew a picture of what would become the Voigtländer Vito. A while later some other clever bods hewed the hundreds of tiny parts in this camera by hand from materials like steel, aluminium, brass, glass and leather. Each person knew that their part needed to work perfectly with everyone else’s or the whole thing would fail. It is testament to their skill that the camera ever worked in the first place, let alone works perfectly some 68 years later.

My particular Vito is in fact a 1953 Vito II featuring a Color-Skopar lens and Prontor-SV shutter with shutter speeds up to 1/300s. The design follows on from the remarkably similar pre-war Vito I design with some technological updates and a lens coated and calculated for the new fangled colour film appearing around that time. The Color-Skopar was a very capable lens in its day and still can be today too. I remember seeing some modern photos taken with a Vito II and knew that I had to have one. Fast forward some eBay shopping, and my camera arrived soon after. With a little cleaning and fettling it shone like new. I contacted the eBay seller to say thanks and to let him know that I’d be using the camera rather than just sticking it in a cupboard to gather dust. I also pointed him in the direction of this blog and we got chatting.

‘The seller’ became Richard, and through Richard I learned that the camera had belonged to his late father Phil who was an agricultural chemist and took many photos with the camera throughout the 50’s, 60’s, and 70’s. Richard was kind enough to send me scans of some of the photos his father took with the Voigtländer and permit me to use them here. So, with thanks to Richard I include a selection of my favourites with captions based on Richard’s descriptions. Please click the pictures for a better view.

As I uploaded these photos for this blog post I realised two things. Firstly, there is a very shiny and tasty looking bicycle just visible in the picture of the begonias in the conservatory, and secondly that this camera has already been to Devon. So it was perhaps fated that I chose this camera to take with me on my summer trip to (you guessed it) Devon! Richard told me that his aunt and uncle owned the Diggers Rest (pictured) in Woodbury Salterton, and I wish I’d had the foresight to plan a trip there in to my holiday. It would have been amazing to replicate the shot from 1960 with the same camera. Oh well…. I’ll have to go back I guess!

Anyway… The little Vito was always destined to come to Devon with me and the gang, and I’d held off using it before the trip. I wanted to record something a little bit more memorable than my average day with it. The Vito deserved that after all these years and all the history that I’d learned about it. Not to mention that it’s actually a great camera for taking on holiday. It’s a full frame, fully capable 35mm gem of a camera that will fold small enough to be carried easily. It doesn’t weigh much at all, it’s whisper quiet, well balanced, mechanically sublime, and a joy to use. It’s the perfect travel companion so long as you can forgive the laughably small viewfinder which seems standard on pretty much all folding cameras from this era.

Before going away on holiday, I had debated the notion of getting a lens hood and a yellow filter for the little Vito, and also strapping on my external rangefinder. In the end though I didn’t do any of these things as each would have ruined the compactness of the camera. I simply used the camera as originally designed. All the exposures were estimated using the ‘Sunny 16’ rule, and focal distances were estimated using my MK1 eyeball. Thankfully the weather was generally excellent so I was able to leave the shutter speed at 1/100 and switch somewhere between F16 and F8 to correct the exposures, giving me a very generous margin of error on the focal distance. Happily, everything turned out well enough for my purposes. The film by the way is Fomapan 100, which I’ve used before. I’m still on the fence about it’s performance – but I’ve got plenty to use up before I splash out on anything else!

Accompanying me on this trip were Lucy, Ciarán, and Olive the rescue pup on her first holiday. We’d made the trip to visit our friend Simon who works at the excellent Britannia at the Beach restaurant in the seaside village of Beesands, and what a lovely place it is too! If you’re looking for a quiet little getaway in South Devon then you can’t go far wrong so long as you survive the miles of driving down very narrow lanes to get there. It’s worth it in the end though as the whole place feels slower and more peaceful than the world you left behind.

Not far along the coast is the larger town of Dartmouth, with its harbour and castle providing plenty of opportunities for snapping photos like these. I think the Vito is particularly suited to this kind of thing too, and I really like the way it’s rendered these scenes. They have a very classic, timeless look to them. There’s really not much to give away that they were taken this year. They could just as easily have been taken in 1953. Something about the tones reminds me of Phil’s pictures of the Runcorn-Widnes Bridge from 1960, and that makes me very happy indeed.

I’d like to finish this short blog post with some thanks. Firstly to Richard for bringing the Vito in to my collection, for sharing the old photos, and for very kindly refunding the cost of the camera by making a donation to this website. I’ve put the donation to good use and bought some lovely Kodak Tri-X film which I can’t wait to use and will be featuring here in due course, so thank you again Richard.

Next, I must pay thanks and tribute to Phil who bought, owned, and enjoyed the camera all those years ago. He must have taken tremendous care of the little Vito for it to reach me in such wonderful condition, and I hope that he would be happy to see his camera being enjoyed still.

Next I’d like to thank you dear reader for making it this far. I hope you enjoyed seeing these photos. However, if you came here looking for a more technical or in depth review of the Voigtländer Vito II, then I invite you to visit the always excellent websites of Mike Eckman and Jim Grey.

Lastly a quick reminder that if you would like to be notified whenever I make a new blog post, simply pop your email address in the box below and let the magic happen.